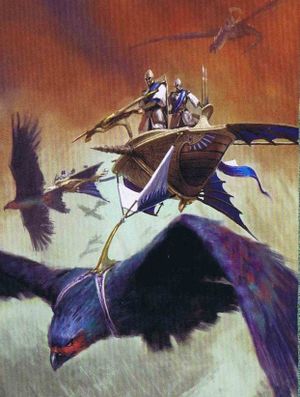 The Lothern Skycutters are sleek airborne chariots that are kept afloat by magic and drawn by Swiftfeather Rocs. [1a]

When Hawkships of Lothern slip their moors, they are often accompanied on the open sea by Skycutters and they also seek to control the skies above the armies of Ulthuan.[1a]

As well as the bows of their crew, the Skycutter is also armed with a Eagle Eye Bolt Thrower mounted on the prow to deal with larger or more resiliant enemies, being powerful enough to even penetrate the scales of a Dragon. [1a]