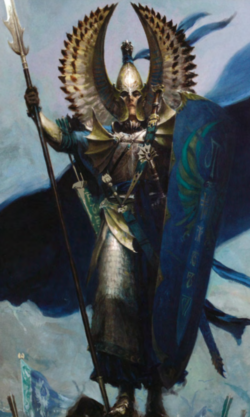 High Elf Nobles are the leaders of their own respected armies and companies, warriors whose skill at arms and years of experience far surpass those of any other mortal race. The noble families of Ulthuan have led the High Elves through times of peace and conflict for thousands of years. They pride themselves on a deep sense of honor, as well as the mastery of both diplomacy and war as art forms. The High Elves believe an existence lived without precision to be hollow, and scarcely preferable to death. Any Elf Noble is just at home fighting with a sword in bloody melee as he is loosing deathly-accurate arrows from afar, or even dictating the strategy of a campaign from a greater distance still.

Though they are loyal to the Phoenix King even unto death, all High Elves of noble blood love intrigue and politics. Unfortunately, this sometimes means that armies are trusted to individuals based on political alignment, rather than on ability. Fortunately these instances are rare -- when the safety of Ulthuan is at stake, few Phoenix Kings have suffered such idiocy for long. There is no shortage of brave and talented commanders among the Asur, and courtly intrigue seldom prevents such individuals from harnessing their skills.