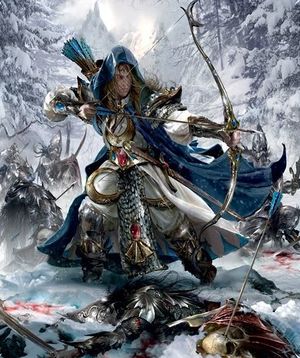 Alith Anar, the Shadow King is the infamous leader of the Shadow Warriors. [3a]

There are many stories of Elven heroes of the Nagarythe from the time of the Sundering, of brave and valiant warriors, of remarkable deeds, and of battles against the darkest foes. The most popular tales concern Alith Anar, the Shadow King. [1a]

Alith Anar's adventures are shared throughout the courts of the Asur, each a tale of courageous defiance against Malekith and the Druchii. The tales of the Shadow King that stem from the years following the destruction of Anlec are, by now, undoubtedly a blend of fable and reality. It is impossible to say for sure which are true and which are invention, for the Nagarythe are understandably secretive about their history since the Sundering.[1a]

His children have never taken his title and are known collectively as the Aesanar - the Sons of Anar. [1a]

Alith was the grandson of Eoloran Anar, once herald of Aenarion who was killed in the dungeons of Anlec by Malekith. His father Eothlir Anar was killed in battle whilst he was quite young [3a] at the Battle of Dark Fen. Following the battle, Alith and the few survivors hid in the nearby marshland, being pursued by the Nagarythe loyal to Malekith. [1a]

As the last member of the great families of Nagarythe, those who had fled from Malekith pledged their loyalty to him with blood oaths in groves within Dragon Pass. [3a] from that point on, he led them on raids on Dark Elf camps, never taking prisoners - any captives were quickly killed. [1a]

Following the Battle of Griffon Pass he nailed 700 captured dark elves onto the white cliffs with bones and nails still remaining there from this act. [3a]

He famously inflitrated the land of Naggaroth[1a], on one occassion even dancing with Morathi before stealing the Stone of Midnight. Outraged, she has offered immortality, a room filled with gold and a night with the most beautiful of the Witch Elves for any that return the stone, but Alith's fearsome reputation has meant these prizes go unclaimed. [3a]