Handmaiden of the Everqueen 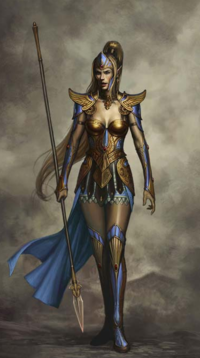 A Handmaiden of the Everqueen.

The Maiden Guard is an elite unit of High Elves consisting of warrior women who serve as the most trusted courtiers of the Everqueen. They form a regiment of a hundred Elf-maids who have been schooled in the arts of war to such an extent that they equal, or even exceed, that of the greatest Elven knights in the use of spear or bow. These beautiful warriors accompany the Everqueen at all times, serving as her advisors as well as her bodyguards. [2]

The Handmaidens are not mere courtiers and attendants, but a warrior guard whose duty is to serve and protect their mistress. Only those with great natural gifts are chosen, the most talented singers and musicians, the most beautiful, the fleetest and most graceful, but above all the most loyal. It is an incomparable honour to serve the Everqueen and those bound to her side will remain there for seven years, during which time they forswear all other companionship and even the company of their families. [1a]

To serve as a Handmaiden is a great honour. It is most commonly bestowed only upon those Sisters of Avelorn who have many times proven their swiftness with blade, their precision with bow and, above all, an unswerving loyalty to the Everqueen. On rare occasion, however, the Everqueen will elevate a member of her court directly into the ranks of the Handmaidens. Such appointments are seldom explained, but require the aspirant to forswear allegiance to all others for a period of seven years - at the conclusion of which, she is free to remain a Handmaiden or return to her former life.[3a]

Tradition dictates that the Handmaidens always number one hundred warrior-maids, but seldom are more than a handful seen at any one time. They normally serve as heralds and messengers for the Everqueen, acting as her eyes and ears outside Avelorn. Should a Handmaiden grace a battlefield with her presence, she is treated with reverence by the High Elves who fight at her side. Even the haughtiest of princes rejoices to have such a warrior fighting in his cause, for the presence of a Handmaiden is a clear sign of the Everqueen’s favour, and moreover a portent of ultimate victory. Should the prince find his forces buttressed by the full complement of one hundred Handmaidens, he will know that the Everqueen herself has joined the fight, and there can be no surer sign that dire times are close at hand.[3a]

The Handmaidens are protected by Ithilmar corselets, favouring the Spear and Bow as weapons. [1a]