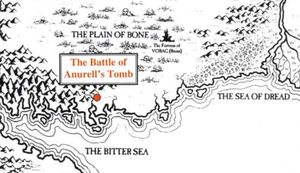 Map of his resting place

Anurell was a High Elf explorer and seafarer during the reign of Bel Shanaar. [1b]

He sailed across the many oceans of the world in his Dragon Ship. [1b]

In -2739 IC he set out to find a route through the lands of Cathay, manging to round the tip of the Southlands before disaster struck. The fleet was attacked buy a horde of great sea monsters rising from the depths and all but two ships were destroyed, the battered surviving vessels limping north before they made landfall at the tip of the Darklands. They tried to build a settlement, but frequent attacks by Goblin’s wore them down and it was in one of those skirmishes that Anurell fell. {Fn|1b}}

His body was entombed with the Navigation Stone beneath a huge monolith and the few surviving elves headed north towards the Plain of Bones, never to be heard from again. [1b]

In 2493 IC [1a] the monolith was located by expedition under Dramalliel from the Fortress of Dawn and a force under Eldril then dispatched to recover his body and Navigation Stone. However on arrival they were attacked by Hobgoblins which they beat back but with considerable loss, before the main Battle of Anurell's Tomb against their Chaos Dwarf masters. [1b]

He had in his possession the Navigation Stone which enabled him to sense the ebb and flow of the currents of the sea, the wind and scry the stars. [1b]