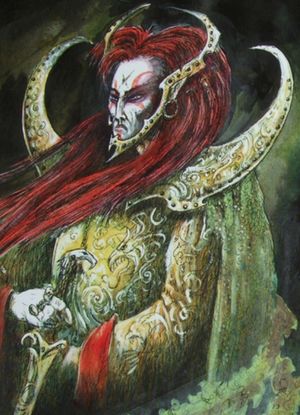 Prince Yrellian is the first born son of the High Elf Phoenix King Finubar. [1a]

A fierce young elf, he has ever counselled war in all matters, declaring that the evils of the world must be exorcised by the swords of the brave before Ulthuan itself falls. His father, a renowned diplomat, saw him as a risk to the work he had undertaken to unite the lands of men, elves and Dwarfs. [1a]

The young prince was intially spiteful and sullen but would thrive in the Lothern Sea Guard and even won the respect of the Swordmasters of Hoeth whilst he was taught to command warships and fleets aboard the Seadrake. Finally he was taught the ancient skill of Dragon-speaking and formed a bond with the Dragon Symiel. [1a]

Yrellian commanded the Seadrake at the Battle of Bleak Crags whilst his younger brother Bel-Alhor the Golden rode his own dragon. The battle raged for three days and nights and it was the actions of the two brothers who claimed the victory for their father. however as the Dark Elf fleet retreated, they pursued, against the Phoenix Kings orders. [1a]

During the pursuit, Bel-Alhor was knocked from his saddle by a lance of magical force and devoured by a Leech Wyrm that had also been following and feeding. Although the Seadrakes bolt throwers slew the beast - it was too late. [1a]

Horrified and wracked with guilt, Yrellian could not return home and pledged to seek out the Galleon's Graveyard which it was said drew in all things that died at sea. There he hoped to recover his brother. [1a]