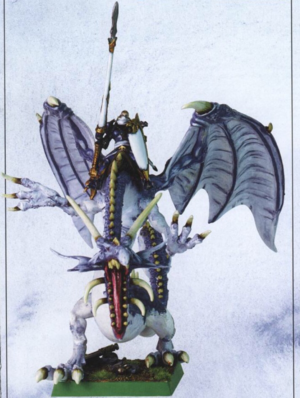 The last of the Athinol Dragon Princes, conversion by Mark Raynor.

Liandra Athinol was a deadly Dragon Princess of Caledor who fought during the legendary War of Vengeance. [1]

Liandra was the first and last girl-child born into the doomed Athinol family of Caledor. Both her father and brother were slain in the war against the Dwarfs, leaving Liandra as the last one to carry the Athinol bloodline. Distraught and filled with anger, she donned her brother's ornate Dragon armour and rode into battle in the guise of a Dragon Prince astride the mighty Dragon, Borgash, the steed of her father. Tragically the Athinol line died with her, for she gave her life defending the Phoenix King, her Dragon's heart skewered by an immense bolt thrower bolt and her body hewn by countless blades. [1]

Liandra was a proud and strong warrior who fought with hatred against the Dwarfs when the last of her family was killed.[1]

Liandra Athinol and Liandra of the House of Athinol would seem to be the same character but other than their name and acestral house they have nothing else in common as written.