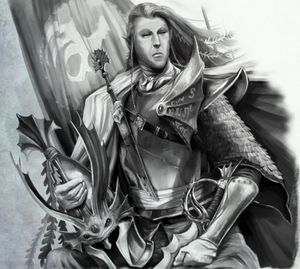 Sea Lord Aislinn is the commander of the High Elf fleet. [1a]

He is known as a brilliant tactician and a implacable foe, although some at court are concerned that he enjoys his often vicious work too much. [1a] Aislinn is notable for his cruel streak and is quick to challenge any Dwarf or human who treats him with disrespect to a duel. [6a]

Lord Aislinn became known as the the Pernicious to his peers. [3a][6a]

Fighting against Orcs & Goblins he rode a blue-white Dragon. [1b]

Following raids on Ulthuan by the Norse, he led a brutal campaign of attacks on their own coastline, his Shadow Warriors and Lothern Sea Guard wiping out entire settlements. [1a]

He led a fleet in 2281 IC against Waaagh! Gutrippa, fighting the Orcs & Goblins with an uneasy alliance with the Dwarf King Byrrnoth Grundadrakk of Barak Varr. Although together the two fleets proved unstoppable and destroyed the greenskins, the alliance quickly broke apart with unintended insults on both sides. [4a]

When in 2344 IC the Pirate Otto Steinroth raided Ulthuan, sacking the city of Sardenath, he carefully trailed the fleet back to Marienburg with his own warships, waiting until they docked before unleashing a devastating attack that left the pirates (and many others) dead, the docks and shipping ablaze and he also forcibly evacuated the High Elf Merchants despite their objections. [4a]

Although on his return the survivors of Sardenath hailed him as a hero, many other courtiers criticised him for unilaterally declaring war on the great human trade city. He ignored this and would subsequently carry out more putative raids on the Norse and the Phoenix King himself saw Aislinn as a ruthless but needed warrior. [4a]

In 2417 IC he engaged the Black Ark Tower of Blessed Dread commanded by Lokhir Fellheart in the Sea of Serpents. Unfortunately the Dark Elf Captain had seen the attack comming and turned the ambush against the High Elves, many of its escorting ships were destroyed by Helldrakes, many of the onboard sorcerers killed by assassins and finally Aislinn himself fought a duel against Lokhir for an hour whilst the Kalendirian burned and sank. [2a]

Mortally wounded he had been left for dead by the Druchii but six months later he washed up on a beach in Eataine, with no memory of what had happened in that period and all his wounds healed. It was assumed that the God of the Sea, Mathlann had saved him and he was quickly proclaimed as his herald. [4a]

At the Conclave of Light, Teclis pledged that Lord Aislinn would patrol the seas and protect the northern coast of the Empire. [5a]

As the forces of Archaon moved south and west, the Sea Lord carried out many stealthy raids on the Norse, assassinating war leaders, destroying supply lines, rescuing and taking prisoners as well retrieving artefacts. [3a]

Aislinn leads a mixed force on his raids. [3a]