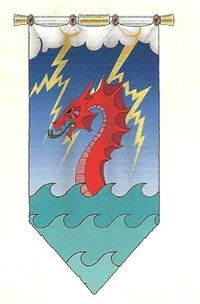 Lothern is the capital city of the High Elf kingdom of Eataine and of Ulthuan itself. [1a]

In 2307 IC the assassin, Gloreir leads a team to kill the Phoenix King Finubar but his prey is saved by Korhil and the White Lion bodyguards of the king and a swirling battle ensues across the rooftops of the city. [2a]

The city is protected by the Lothern Sea Guard and Lothern Skycutters, the Sea Guard also man the many Eagle's Claw Repeater Bolt Throwers on the walls and ships of the city.[1b]

The Phoenix temple is protected by the Phoenix Guards whilst the King himself has a body guard of White Lions who wear his colours. [1b]

The human nations that trade with Lothern bring in books, grain, gems, gold, meat, ores, wool, silver, tobacco and Dwarf clockworks that would not be traded directly. [5a]