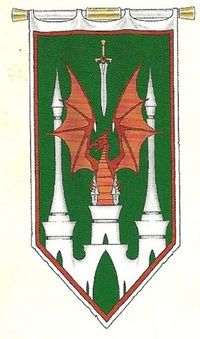 The Dragon Gate is one of the five great fortresses that guard the Inner Kingdoms of Ulthuan. [1a]

It has a standing garrison of some of the finest warriors of the realm, with service at the fortress being considered a great honour, although few survive thanks to the many dangers. Originally the Dragon Gate had more than four times as many soldiers in its garrison than any of the other gates. [1a]

Nobles of Caledor favour service on this gate, honouring their ancestor with the Eagle Claw Bolt Throwers on the walls having their steel bolt tips tempered in Dragonfire. [1a]

When it was created by Caledor I he intended it as his War Capital so it includes a huge palace complex at its heart, able to house not only the Phoenix King but all his courtiers as well. However this only meant that the Dark Elves spent more effort in attacking it, sending six massive armies against during the first decade of its existance. [1a]

It is now seldom occupied by any elves other than the standing garrison. [1a]