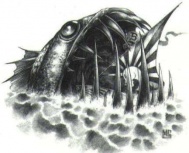 A Hawkship being swallowed by a Black Leviathan.[1]

Hawkships are ships of the line of the High Elf Navy. [1a]

Created orignally to counter Norse raiders and for patrol duty on the rocky coastlines of Ulthuan to guard against any invasion raider, the Hawkships are swift and highly manoeuvrable. They are designed to perform hit-and-run attacks against larger craft and then escape to bring warning back to the Elf ports. [1a]

Their crews are formed of hardy young seafarers, who relish the danger of their task and take delight in performing the most alarming and seemingly foolhardy of manoeuvres. [1a]

They are armed with a pair of forward firing batteries of Eagle's Claw Repeater Bolt Throwers. [1a]