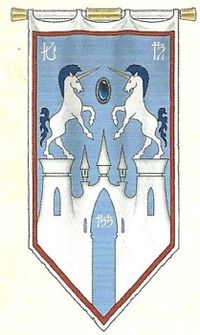 The Unicorn Gate is one of the five great fortresses that guard the Inner Kingdoms of Ulthuan. [1a]

It has a standing garrison of some of the finest warriors of the realm, with service at the fortress being considered a great honour, although few survive thanks to the many dangers. The majority of the garrison is drawn from Ellyrion. [1a]

The Gate defends the longest and most treacherous Harpy infested mountain passes leading to the Inner Kingdoms, so suffes the least amounts of attacks from the Dark Elves but has to defend against regular attacks by the Harpies and other creatures. [1a]

Seven great bastions form the main structure of the fortress and the position of the unicorn design on a warriors shield displays which bastion they serve. [1a]

During the reign of Bel-Khorhadris the defences were extended with several dozen towers to assist in protecting from aerial attacks. [1a]