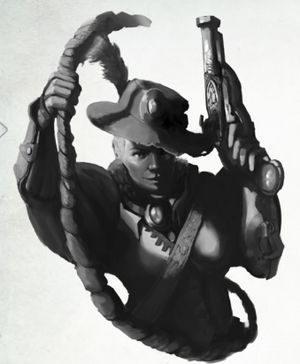 Rivermarshal Marham is known to be completely ruthless in her pursuit of justice. [1a]

While other girls were practising needlework, Sigfreda was out in her rowboat collecting tolls from fishermen and even as a child she tore the heads off any dolls that looked at her sideways. Her aristocratic parents thought that fencing lessons might help with her aggression, but they only made her more dangerous. [1a]

The iron-jawed Rivermarshal is skilled with both rapier and pistol, and also keeps a whip coiled on her belt. [1a]