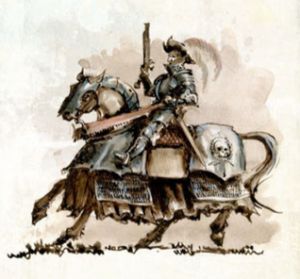 Hans Leitdorf, brother of deceased Marius Leitdorf, was the Grand Master of the Knights of Sigmar's Blood. Though he had a claim on the title of Elector Count of Averland, he decided his position in the Order to be of greater importance.

Ten years before End Times, Hans Leitdorf along with witch hunter Tibalt Greer had led the Knights of Sigmar's Blood into Sylvania to destroy the Black Dame of Kervheist. Many good knights had died back then. When the End Times finally befell the world, Hans led his knights against the forces of Mannfred von Carstein, the Grand master single handedly fought his way through a horde of skeletons to reach the Vampire Lord, but was ultimately slain in their ensuing duel.[1]