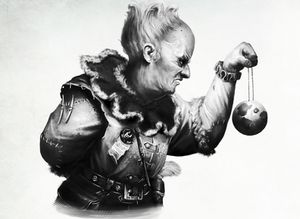 Professor Frederich ‘Old’ Weirde is a author, antiquarian, historian and a Professor of Esoteric Studies at the University of Altdorf. [1a]

He is a fellow of the Altdorf Men's Historical Society and a connoisseur of Estalian port. [1a]

When driven from his study by his wifes cough, he can often be found in his favourite taverns - the Hanging Crow and the Picture and Wabberthwait. [1b]

He attended the Conclave of Light during the Storm of Chaos and was even called upon to speak briefly by the Elector Count of Ostland. [1c]

During the Storm, he was visited by the Witch Hunter Wilhelm Steinberg who warned him that he was under suspicion of heretical consortation with diabolic powers, confisicating many books and burning some on the spot. [1e]

Professor Weirde was commissioned to write a history of the event known as the Storm of Chaos, which was published by Altdorf Press as Darkness Rising. [1a] The books was a compiliation of his notes and essays from the period of the great conflict as well as correspondance from his observer in the field, Stefan and various historical texts from the university library. Copies were to be found in the Great Library of his home city as well as the Imperial Palace with notables such as Graf Boris Todbringer requesting their own personal copies. [1b]