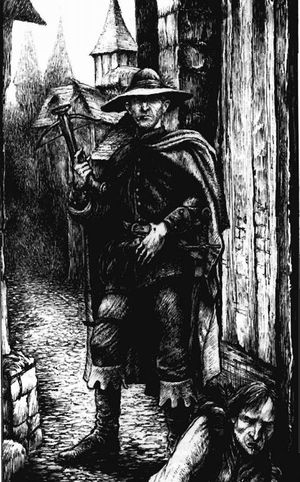 Anton Veidt was a Bounty Hunter in the Empire. [1a]

By his 48th year of life, he was a gaunt, haggard man with cold, black eyes, his cheeks covered with greying stubble and yellow stained fingers from the cigars he smokes. [1a]

In 2480 IC he was one of the group of adventurers that were led by Oswald von Konigswald into Castle Drachenfels against its owner, the Great Enchanter Drachenfels. [1a]

Badly scared, he survived the expedition but saw little reward save for a brief moment of fame and went back to hunting criminals for a living. [1a]

Twenty five yeas later, when Detlef Sierck was commissioned by Oswald to create a play based on the events that led to the defeat of Drachenfels, he was invited to attend., re-uniting with the other survivors. [2] However, as they were killed one by one, he prepared to leave the castle and head for Bretonnia, but before he could do so he too was attacked and killed. [2b]

He carries a lovingly tended Longsword, a Crossbow Pistol with a 3 round magazine. [1a]