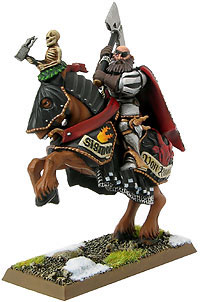 The Grand Master of the Knights of the Bull.[1]

Leopold von Raukov is the Grand Master of the Knights of the Bull, a Knightly Order based within Ostland. He is also the cousin of the reigning Elector Count, Valmir von Raukov. Leopold has great pride in his land, his family and the empire, and wields a powerful two -handed axe, which was forged from the twin axes of a Beastlord he slew in single combat. Always in search of enemies that he can drive out of the woods of his homeland, he and his knights are famous for their "Bull Attack", a formation which they use to decimate their enemies, with Leopold always leading at the forefront.[1]