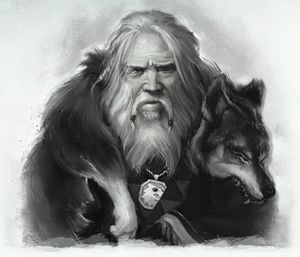 Erich Granholm is the High Priest of Nordland of the Cult of Ulric, residing in Salzenmund. [1a]

His father and mother were scouts in the baron’s army and he was born in Kronven in southern Nordland, learning to stalk and kill Beastmen in the forest. Erich became an initiate in Forstfast, ascending through the ranks to his current position in Salzenmund. [1a]

Several times a year Erich will take a party of followers into the wilds to hunt the foul creatures that infest the woods and hills of his province. [1a]