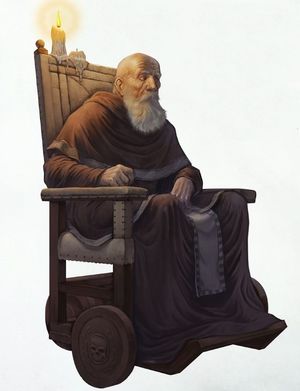 Wilhelm von Vaulk is a Professor of History, Magic and Warfare at the University of Altdorf. [1a]

As young nobleman, Whilhelm was noticed by a passing Shadowmancer of the Grey Order and inducted into that order where he rose quickly, showing an talent for battle magic. [1a]

By the time he reached his mid thirties he was a fully fledged Battle Wizard, often joining Reikland State regiments as an advisor and to use his magic in battle. [1a]

Whilst campaigning in the Border Princes he determined that Greenskins led by a cabal of Shamans were preparing an ambush. Although he warned the commander, he ignored this and ordered the regiment to march through the pass anyway. During the subsequent onslaught of the ambushers, Wilhelm defeated the cabal but was shattered in body and soul, his magic burned away. [1a]

Unable to perform magic, he took up a position as a professor at the university teaching the theoretical aspects of the arcane arts as well as history, and military tactics. [1a]