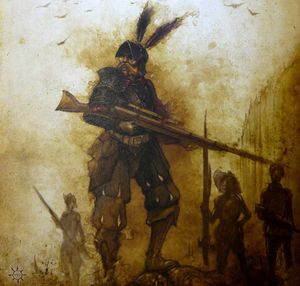 Jubal Falk and members of the Ironsides

Jubal Falk is a Engineer of the City of Nuln in the Empire. [1a]

A veteran soldier, he is the field commander of the Nuln Ironsides but he is also a skilled military engineer, although one with no tolerence for laziness or incompetance. [1a]

He was born a coopers son in Nuln and has risen quickly at the Imperial Gunnery school, many even seeing him as a future Guildmaster. [1a]

After their muster for the Battle of Nuln in 2510 IC, Jubal commanded the company at the brutal fight for the Crow's Levee, holding the line against Dolgan cavalry charges. Although wounded by a axe blow, he continued in command, even slaying a Chaos Sorcerer with a precise headshot from his Hochland Long Rifle using alchemically forged shot. [1a]