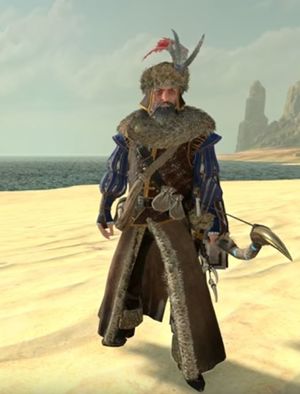 Markus Wulfhart is the first Huntsmarshal of the Empire, the Emperor's captain of scouts. He has taken up a quest of slaying every monster he possibly can.

He was born in the town of Drakenburg, in Drakwald Forest. However, his town was destroyed by a one-eyed Giant. In revenge, Wulfhart slew the beast. On that day, Wulfhart swore that no other towns should be destroyed in the same way, if he could help it. Karl Franz offered Wulfhart a position as an Imperial Knight, but Wulfhart refused. Instead, the Emperor gifted him the Amber Bow, a magical bow blessed by the Amber Order of wizards and the title of Huntsmarshal. Wolfhart has since gathered an elite group of similar huntsmen, and has been the demise of many beasts.

In 2501 IC he tracked the Beasts of Telldross across Norsca, killing various other monsters in his progress but the beasts of the warband remain elusive. The Huntsmarshal returns to the Empire in the winter but vows to return to hunt them again. [2a]