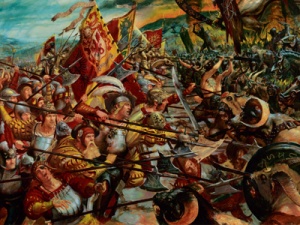 Empire Halberdiers are one of the most common basic line-infantry fielded by the Empire.

Equipped with the fearsome halberd, a long-shafted weapon with a heavy blade, this weapon is capable of smashing through heavy armor and the tough hides of deadly creatures in equal measure. Halberdier regiments are amongst the most numerous infantry type due to the Emperor's requirement that each Elector Count maintain a standing force of Halberdiers because of their strength and versatility on the battlefield.

Wearing only a chest-plate, these men go to combat without a shield, but bravely engages their enemies in a tight formation, using the powerful swipes of their blade to compensate for their lack of armor with bone-crushing force. Such troops are suited for both defense and offense, capable of holding ground in a narrow passage against numerically or physically superior opponents, as well as being the spearhead of a massive Imperial assault. As such, these men are a very common sight on any Imperial battlefield.