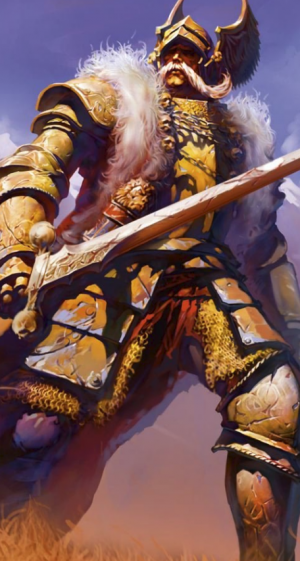 Kurt Helborg is the Grand Master of the Reiksguard Knights, Rieksmarshal of the Empire's military forces and one of Emperor Karl Franz's most trusted military commanders.[1a]

Tall and strong, he is the very image of a heroic warrior, his armour polished to a mirror sheen and his sword arm as strong as his courage is unbending. As the Grand Master of the Reiksguard, Helborg commanded the loyalty of one of the Empire's mightiest military corps. When these warriors were personally led by their inspirational leader, they were an almost unstoppable force, an implaccable tornado of steel that fearlessly thundered across the battlefield, driving the enemies of the Empire into the blood-soaked ground.

Kurt Helborg was reputed to be the greatest swordsman in the Empire, though this a title that is hotly contested by the Emperor's Champion, Ludwig Schwarzhelm. These two grim warriors were bitter rivals who regularly competed on the tournament field to answer the question of who was the mightiest warrior of the Empire. He went undefeated by all who challenged him, until his encounter with the Grail Knight, Viscount d’Alembençon on the moors of Couronne.

As the Reiksmarshal, Kurt Helborg was also commander of all the Empire's armed forces, second only to the Emperor himself. As such, he had spent most of his life in battle, and became one of the most experienced generals within the Old World. Kurt Helborg had led the Reiksguard and Imperial armies in wars fought all across the known world, from the dark forest of the Empire and icy wastes of Kislev to the blazing deserts of southern Araby. As a general, he was virtually without peer, leading entire armies of Knights in thunderous charges of gleaming plate armour and glistering lance points. As a mighty warrior he fought where the combat was thickest, his Runefang cleaving his foes without mercy.[2]