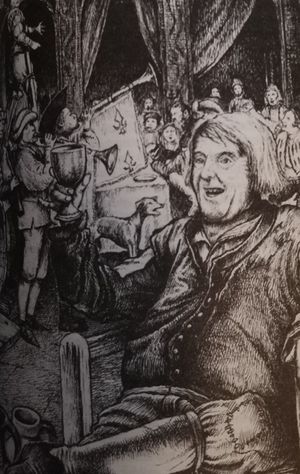 Rudi Wegener was a Bandit king of the Reikwald Forest who became part of the expedition to destroy Drachenfels. [1]

As a Bandit, he and his men had often passed themselves off as strolling players.[1e]

He and his men joined Prince Oswald von Konigswald in his quest to defeat the Great Enchanter, although he was forced to kill his followers after they became possessed one night. The only exception was Stellan the Warlock who had lived with the bandits but now sought to pit his own magics against the legendary necromancer. [1a]

He nearly reached the heart of Castle Drachenfels but was caught by a trap, breaking many of his bones. [1c]

Rudi survived and was invited to the premiere of the play Drachenfels by Detlef Sierck[1d] and threw a great party on the first night in the fortress (although Prince Oswald paid for it). Late in the evening, he staggered out to relieve himself and found an undead version of Erzbet the Dancer-Assassin waiting for him. [1e]

He favoured a two handed sword. [1b]