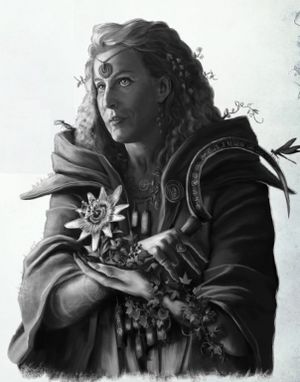 Tochter Grunfeld is a Wizard Lord of the Jade Order of the Empire. [1a]

She has been seen in multiple forms - a green-skinned tree-spirit, a young woman with flowing white hair entwined with ivy and as a round, grandmotherly figure. [1a]

She was well known around the east of Stirland more than fifty years ago but no-one knows her true age. [1a]

With members of the Cult of Rhya, she founded a commune, Bluetegarten, east of Wurtbad but later rumours reached the college of unconventional practices and she decided it was prudent to enrol those she could. [1a]

Following this she based herself at the Jade College in Altdorf and became a prominent member of the high council. [1a]

Her primary concern is spread of Necromancy and vampirism in Sylvania and the east of Stirland. [1a]