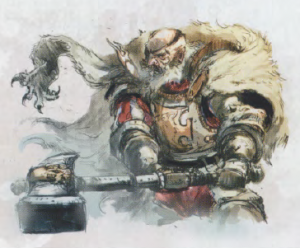 The last Grand Master of the White Wolf.

Axel Weissberg was the last Grand Master of the Knights of the White Wolf, replacing Rein Volkhard at some point during the End Times.

A fiery tempered warrior and veteran campaigner, Axel Weissberg did not suffer fools lightly. Thus when Graf Boris Todbringer, announced his intent to hunt down Khazrak One-Eye, Weissberg had challenged his master in the most strident of terms. His lack of tact earned him a feirce reprimand, and a curt order to remain in the city and follow Valten's orders to the letter. This Weissberg did, though with all the good grace of a wounded boar.