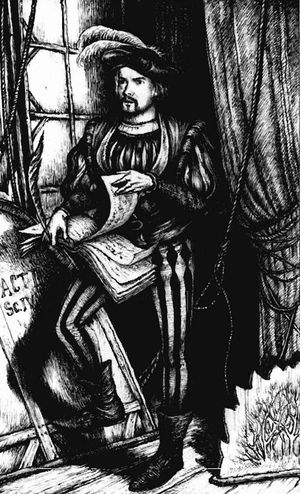 Arguably the greatest actor, producer and playwright of The Empire, Detlef Sierck is also the lover and companion of Genevieve Dieudonné. He is probably a greater dramatist than Tarradasch.

Giving proof of his extraordinary talent, Detlef gained fame and fortune in Middenheim. He was later hired by the Count of Middenland to write, perform and direct a theatre play called The History of Sigmar. Determined to create a masterpiece, Detlef saw no reason to spare in the expenses. Unfortunately an outbreak of plague cancelled the megalomaniac project.

Forced to assume all expenses and responsibilities, Detlef was ruined. Unable to pay, he was incarcerated in the Mundsen Keep, a debtor's prison, for the princely sum of "119,255 gold crowns, 17 shillings and 9 pence"[1c].

Oswald von Konigswald made Detlef an offer which he couldn't refuse: all his debts would be paid, and he would be handsomely rewarded for the creation and direction of a new theatre play based upon Oswald's heroic feat: the slaying of Constant Drachenfels (which feat occurred when Detlef was only 4 years old)[1b].

Detlef accepted and wrote a play named Drachenfels which was performed at Castle Drachenfels before Emperor Karl Franz, Prince Luitpold, the Electors and other high-ranking officials.

He is currently the owner of the very successful Vargr Breughel Memorial Theatre, patronized by Prince Luitpold[2]