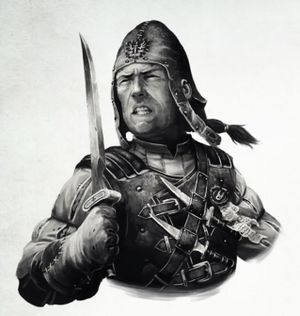 Filthy Harald Kleindeinst is a famous Watch Captain in Altdorf. [1a]

Harald is an intimidating man standing over 6 feet tall and he is in excellent condition, despite his advancing years. [1a]

As a watch captain in Altdorf ’s Luitpoldstrasse Station he ended the last Waterfront War but his career was destroyed when he killed Ulli von Tasseninck, the nephew of a Elector Count who had threatened a young girl with menace. [1a]

The so called Beast Murders brought Harald back into the spotlight with his expertise being significant in successfully closing the case. However in doings so he has made powerful enemies including corrupt watch captains, the Fish war chiefs, and no fewer than two Electors but luckily he also enjoys the protection of Emperor Karl-Franz. [1a]

As a reward he has been placed in charge of the Atrocities Komission, which looks into the most appalling crimes committed by Altdorf ’s most hardened criminals. [1a]