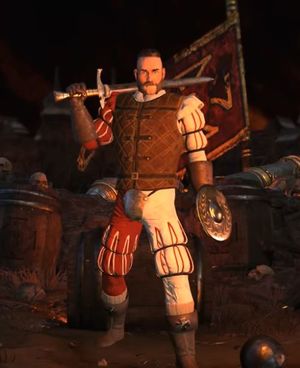 Konrad Vollen was a Captain of the Empire. [1]

His father, a swordsman for the Elector Count of Reikland died in battle when he was 15 years old and he inherited his sword and armour. Konrad followed in his footsteps and steadily rose through the ranks as other men died to become a Captain as they fought in the many battles that continued to tear apart the Empire. [1]

When Magnus the Pious united the Empire to fight the Great War against Chaos, Konrad and his men joined his army and fought their last battle near the ity of Kislev, They stodd strong but by the end of the brutal battle, only Konrad had survived. Impressed, Magnus attached him to his own retinue when he returned to Nuln. [1]