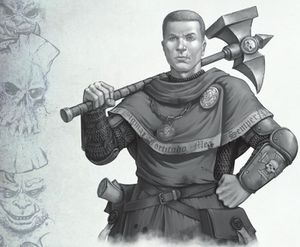 Diel Ulricsson, Blessed of Sigmar is a Warrior Priest of Sigmar. [1a]

He grew up in a tiny hamlet within the Drakwald. [1a]

When Beastmen overran it, they were only stopped when he confronted them, holy fire leaping from his fingertips. He would later stumble out of the forest, covered in the blood of the Beastmen, his eyes burning gold. [1a]

He was interrogated by Witch Hunters and Scholars as well as theologians and was likely to have been killed as a heretic but he miraculously escaped. [1a]

Now he travels the Empire, often accompanied by a band of Flagellants. [1a]