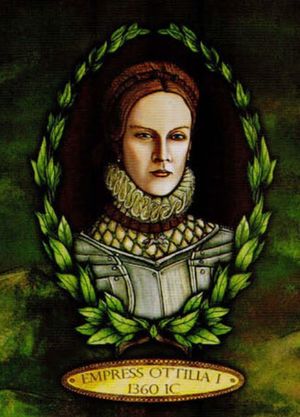 Ottilia I was a Elector Countess of Talabecland who declared herself Emperor in 1360 IC (Imperial Calendar). [1a][4a]

In 1359 IC she walked out of the meeting of the Elector Counts, declaring that the chosen candidate, the Elector Count of Stirland, an enemy of her homeland, had only been chosen due to bribery and corruption.[1a] [2a]

The then Grand Duchess consulted the powerful Cult of Taal as she made preparations for her succession from the Empire. She also approached the head of the Cult of Ulric, Ar-Ulric Krieger who was equally infuriated by the Imperial elections being controlled by the Cult of Sigmar and invited him to move his seat of power to her city, claiming to have proof that Sigmar was not in fact a god. [1a][5a]

Ar-Ulric moved and was made welcome in the Eye of the Forest, and Ottilia gave him her evidence, which he used to discredit the Sigmarites as heretics and she then banned the cult from her lands. Furthermore she declared her Grand Province as independent and herself as the new Emperor, being crowned by Ar-Ulric himself. [1a]

A large army was dispatched by her rival but she met it in the field with her own smaller army and defeated it at the Battle of the Talabec. She then withdrew to her own city, as the Empire descended into chaos. [1a]

In 1361 Ottilia founded the Talabheim Battle College to train Wizards so that she would not be at a disadvantage if facing enemies skilled in the arcane arts. [3a]

Her descendants would consider themselves as the Ottilian Emperors for nearly a thousand years until Magnus the Pious reunited the Empire in 2304 IC. [1a]

Many in the Cult consider her reckless, but hardliners still admire her and suggest that she ought to be thought of as the first Wolf Empress having outlawed the cult of Sigmar in Talabecland and extolled the belief that Sigmar was never anything more than a mortal follower of Ulric. [5a]

She led her bodyguard knights, the Order of the Black Rose into battle herself on a number of occasions including at the Battle of the Talabec. [2a]

With a very mixed army of citizen and mercenaries at the Battle of the Table River, she had her entire army including herself wear red and yellow ribbons on their left arm which helped establish an esprit-de-corps it had been lacking. [2a]