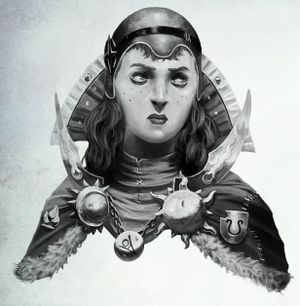 Janna Eberhauer is the Deputy High Wizard of the city of Middenheim in the Empire. [1]

A friendly and personable woman with an active social life, she is not what many expect of a mage. [1a][5b]

A tall (5’ 9”) and attractive woman with shoulder length auburn hair, lots of freckles and hazel eyes who is invariably well dressed in stylish but practical clothing. [1a][5b]

Following the devastating Storm of Chaos she remained in charge of those mages not taking the field in pursuit of the forces of Chaos with the High Wizard. [3a]

Although only in her thirties she is already a powerful Magister – an Astromancer of the Celestial Order of Magic. [2a] She is also practiced at getting information out of those she converses with whilst also not giving her own opinion, often sounding ambivalent - quite deliberately. Janna is also a moderately talented flute player. [4a]

Janna has a younger sister, Erina Eberhauer who is also a mage. [4b]

On free evenings she can often be found in the Singing Moon as she and Eva Dietrich are good friends, some even claim that Eva is Janna's mother. [5b]