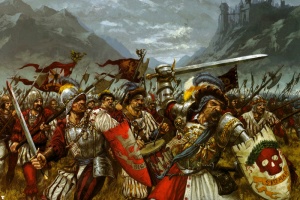 Empire Swordsmen are one of the most common basic line-infantry fielded by the Empire.

These daring soldiers are often romanticized by Imperial poets as tall dashing figures, often bravely engaging the best enemy regiments with only their bravery and combat skill, striking an opponent's weak spot while knowing how to defend himself with his battle-worn shield. This, along with their tremendous skill with the sword and their flexible formation makes them a tough challenge for even the most skilled opponents, providing the Empire with powerful offensive capability.

They wear highly ornamental half-plate armor that bears the emblems of the Empire, their provinces, and other personal heirlooms and talismans. With the Empire housing many of the finest fencing schools within the Old World, many have regarded the Empire as having one of the best swordsmen in all of the human kingdoms, and some say are even better than the fearsome swordsmen of distant Estalia.

One of the deadliest Swordsman regiments are the Swords of Ulric from Middenheim.