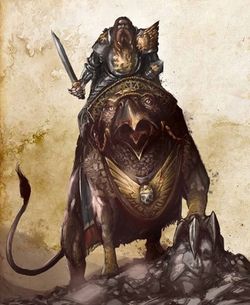 Theodore Bruckner, also known as the Hound of Judgment and the Titan Headsman, served as the Elector Countess Emmanuelle von Liebwitz of Nuln's headsman and personal and judicial champion. [1a]

His role that exists to enable the Countess to meet the ancient rite of trial by combat available to the Empire's aristocracy, except after the commission of the direst of crimes. He was known for his massive size and near-superhuman strength. [1a]

The status of headsman makes Bruckner, in effect, both the personification of bloody-handed justice in the city and death incarnate to the Countess' political enemies. A giant of a man, dour, ruthless and taciturn, he towers head and shoulders over even the sturdy folk of Wissenland who make up the majority of Nuln's citizenry, and it is of little surprise that many tales have grown up to surround him.[1a]

Some stories attribute his great size to sinister origins in Norsca, darkly tainted blood or even alchemical experimentation at the Countess's behest. The truth however lies unknown, save to Bruckner himself and perhaps his patron. He is famed as a savage and skilled (if unsubtle) fighter and most of all for his prodigious - some say inhuman - strength. Such is his physical power that during his judicial duel with the noted swordsman Lord Hanz Kraster, that after Kraster by virtue of superior speed and technique had managed to disarm the hulking Bruckner, undeterred, the Champion of Nuln grappled his plate-armoured opponent, lifted him aloft and snapped his back with his bare hands.[1a]

For Bruckner such mystique as his mysterious origins and might have created serve him well, enhancing the reputation his bloody record has inspired, sowing fear and apprehension in those that would face him in combat or scheme and plot behind the Countess Emmanuelle's back. Bruckner is however no general or war-leader, and has no talent or taste for such things, even if others would follow him - which is doubtful given the hatred his name engenders amid the burghers and lordly families of Nuln. Instead he is content to fight and kill at his mistress's command, and has lasted over a decade in his highly paid office, making him the longest serving Champion of Nuln in living memory.[1a]

With the threat of Tamurkhan's host ravaging its way northward, Bruckner rode out with Nuln's army, as he had before, the huge and nearly uncontrollable astride the huge and nearly uncontrollable Demigryph 'Reaper' - itself a freakishly large example of its kind taken from Nuln's war-menagerie. At the Countess' command, Bruckner had taken an oath, sworn before the great council of the city to slay Tamurkhan for his crimes and despoliation against Wissenland, and at his mistress's insistence, he had taken with him a talisman of the Wizard, Elspeth von Draken, to protect him from the malign powers of the enemy - a decision that would have fateful consequences as events unfolded at the Battle of Nuln in 2510 IC.[1a]