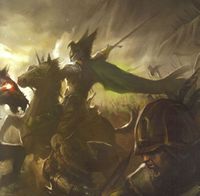 Martin was the Elector Count of Stirland during the war against Mannfred von Carstein. [1a]

Following the defeats of Mannfred at Altdorf and Marienburg, Count Martin led a large Empire army in pursuit of the retreating vampire lord, chasing him into the depths of Sylvania. He found him at Hel Fenn but the vampire had raised a huge army of the dead to face those who had chased him so far. Sending for assistance from his Dwarf allies, Martin decided to face him and vanquish him completely at the Battle of Hel Fenn, even slaying Mannfred with his own Runefang. [1a]

Following his victory he proclaimed a great hero with statues erected to him across the Empire. He also took possession of Sylvania uncontested by the other Electors as they felt he deserved it, but more importantly no one else wanted it. [1a]