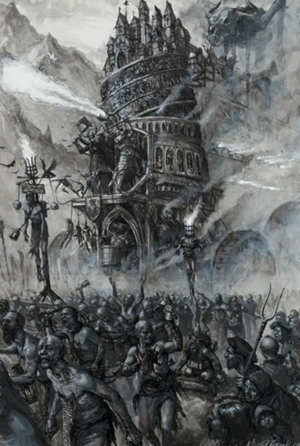 The Empire War Wagon is an extremely heavy version of a chariot creating a mobile battle tower whose armour protects its crew of six warriors and which is pulled by two sturdy warhorses. [1a]

As of today, the use of War Wagons within the battlefields of the Empire is now obsolete, however it has been known that War Wagons are refitted to serve as either an Arcane Battle Altar or a War Altar of Sigmar. In the past, War Wagons can vary greatly in their size, with some War Wagons being only as large as an over-sized hay-cart, while others can grow to the size of an Empire fortress. As of now, War Wagons have been replaced with the newer and more heavily armored Steam Tank.

The high walls of the tower protects the crew from arrows and attacks from the ground. War Wagon work as a movable platform from which it could either transport Empire soldiers through the battlefield or provide a vantage point for units of archers, crossbowmen, or handgunners to shoot the enemy. War Wagons can also install a piece of artillery into its tower, providing the artillery with adequate speed and provide the Empire army with devastating firepower.