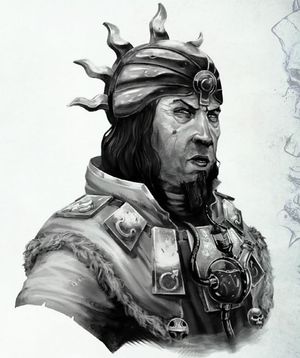 Albrecht Helseher is the High Wizard of Middenheim and a Lord-Magister of the Gold Order. [1a]

He has been credited with the creation of the Stampede Spell, but in reality (which he confirms to anyone who asks) he purchased a scroll containing the spell from a Kislevite trader.[3a]

A gaunt man who stands 5' 10" tall with vivid blue eyes, a mane of black hair, going grey at the temples, his fingers are often noted as long and strong despite their delicate appearance. He normally wears black or grey robes and unlike his deputy is careless of fashion, [1a][2a] prefering free flowing robes that do not constrict his movements. [4a]

His primary concern and motivation is his research and he seldom leaves the guildhouse. [1a][2a]