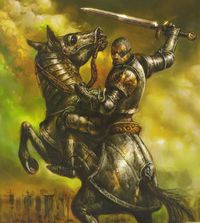 Grandmaster Blucher von Vincke was a General of the Empire. [1]

His second campaign was against a Chaos warband threatening Bögenhafen, where he used pistoliers effectively to taunt and harass the heavily armoured foe, their pistols able to penetrate their defences with ease. [1c]

As a General he commanded the forces that destroyed Grey Seer Grabsnitch, quelled the Peat Uprising at Franktown and defeated Greengut Ironlung at the Battle of Taranto Pass.[1a] He campaigned in the Middle Mountains against Orcs, using light infantry to screen the main column, having learnt lessons from reading about the Battle of Blood Hollow.[1c]

At the battle of Helot's Bridge in 2515 IC, he used a similar diversionary tactic to Ottilia I at the Battle of the Talabec River and had a famous victory. [1b]

He held the position of Grandmarshall of the Grand Armies of Altdorf for twenty years as well as Wielder of the Emperor's Sword before he retired to live with his wife of fifty years Matildha.[1a][1b]

He was the author of The Empire at War, a book that described five key battles and lessons that could be learnt from them. It was published in 2523 IC (Imperial Calendar), shortly after his death. [1]