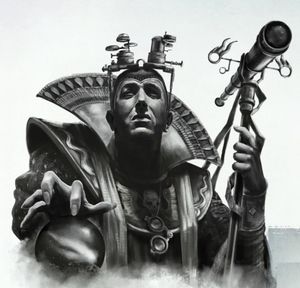 Raphael Julevno is a Wizard of the Celestial Order. [1a]

Clean-shaven and attired in the lavish robes typical of the college, Julevno looks younger than his 47 years. [1a]

He is the son of a actress in Nuln who claimed his father was a mercenary from Ostland. She resented his strange behaviour and tried to put him into a workhouse but he fled, becomming initially a beggar, but after receiving visions of a massive building with sixteen towers, he was drawn to Altdorf and the Celestial College. The Wizard Lord Glazend had foreseen his coming and immediately took him as an apprentice. [1a]