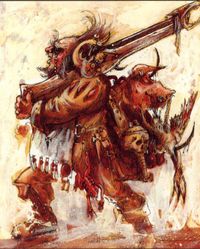 Haf Lorenentz also known as Fat Haf is figure of folklore in Wissenland. [1]

He is spoken of in childrens tales and in particular the play The Adventures of a Dumpy Drummer as a happy fellow who raised the spirits of the army of the Elector Count of Wissenland .[1a]

He grew up in the poor quarter of Wissenburg and in 2356 IC (Imperial Calendar) it is said he was responsible for burning it down in revenge for his miserable childhood in the workhouses. [1a]

In military servicec, rather than the cheerful figure of fun he later become known as, he was considerd the most foul-mouthed and contentious of soldiers. He also apparently smelt terrible - partly due to the animal corpses he hung about his person. [1a]