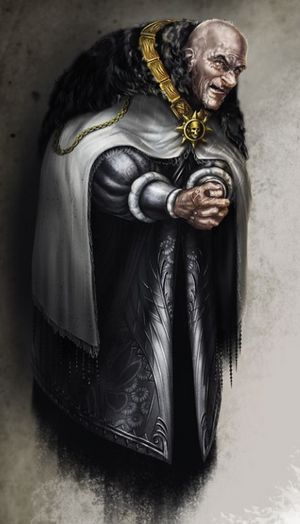 One of Emperor Karl-Franz's closest advisors, [1b] he is self-made man who has a particular enemy in Graf Rudiger von Unheimlich, patron of the League of Karl-Franz and stout defender of aristocratic privilege. [1a]

Although Baroness Lotte Hochsvoll is High Chancellor of the Fisc for the Council of State, she is disinterested in keeping detailed accounts and therefore delegates it to Mornan Tybalt.[2a]

The son of a palace clerk, he had used his intelligence, wit, determination and blackmail to rise through the ranks. [1d]

In his youth he had served in the army and gained regard for his skill after being promoted to the quartermaster's staff. He joined the clerks at the Vaults and rose to become chancellor of Altdorf. [2b]

He attempted to impose the annual 2 Gold Crown Thumb Tax on all able-bodied men in the Empire but this led to riots in which he lost his own thumb. [1d]

Altdorf, Crown of the Empire notes his father was a grocer rather than a palace clerk. [2b]