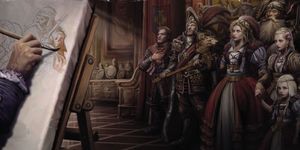 Maria-luise, the Emperor and their family

Maria-Luise von Walfen is a Lady at the Imperial Court of Altdorf, and the mother of the children of Emperor Karl Franz. [1a] Although the Emperor remains a bachelor, he is tremendously fond of the Maria-Luise. [1a]

Maria was a childhood friend of the Emperor.[1a]

She is a responsible and conscientious mother to the Emperor’s children, always aware of her precarious position, and when she appears in public is demure and aloof. She does, however, make her voice heard in the Privy Council.[1a]

Maria-Luise has two legitmised children with the Emperor: Prince Luitpold, heir to Altdorf, and a daughter Alia.[1a]