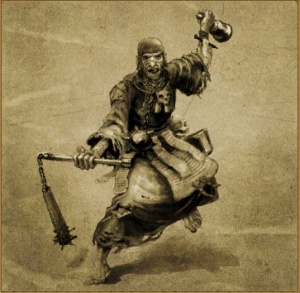 In times of war, plague and extreme hardship, there are those amongst the Imperial populace who become displaced, their homes, livelihoods and family removed by calamity. Due to hopelessness and horror, these folk are driven mad, and cling to the belief that this is a sign that the End Times are nigh! These people wander the Empire, joining warbands of other insane flagellants to spread the word of imminent destruction, instructing others to repent of their sins. They seek more "proof" of impending doom.[1][2a]

When war threatens, bands of crazed Flagellants instinctively gravitate towards battlefields, appearing unannounced and charging headlong towards the enemy without fear or hesitation. Flagellants fight in a crazed frenzy, driven insane by the horrors the world has inflicted upon them and desperate for their pain to end. They are usually armed with flails, large bells, flaming torches, maces and occasionally scythes.[1]