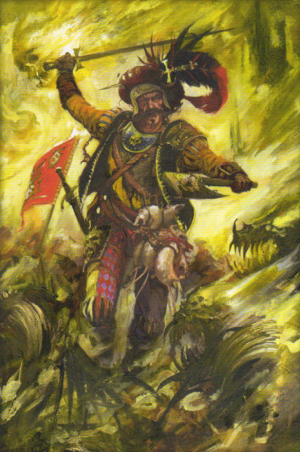 Free Company Militia is a term that describes the Men and Women from neighboring towns or villages that have taken up arms, willingly or not, to serve alongside the armies of the Empire and defend the lands of their birth.

Whilst the mainstay of the Imperial army consists entirely of professional soldiers like Swordsmen, Halberdiers, and Spearmen, its armies are often bulked up by a large portion of Free Company regiments.[1]

Some of these regiments consist of mercenaries, but much of it consist of local militias and levied servicemen to fight as a support unit should the need for quantity over quality be required. Many if not all of these Militia's are outfitted with a motley variety of weaponry and armor that are more often then not provided by the individuals themselves. On rare occasions, some of these Militia groups consist of retired grizzly veterans who have left the military and settled down in a peaceful life many years ago, and it is their wisdom and courage that has held many Militia regiments together.[1]

Most of the time however, these regiments consist of inexperienced villagers with little to no combat training, and can only be readily identified by only a few scraps of tatty clothing, which may sometimes have a resemblance of a uniform of some kind, and often incorporate elements of the state's official colors. Equipped with mostly makeshift armor and weapons, which will include assortments such as bows, spears, swords, clubs, and particularly in rural communities, simple farming equipment like pitchforks or grain-scythes, these militias are often looked upon with distaste by many Empire Generals, and seldom use them in the battlefield. Though their lack of conviction for a cause can be questionable, especially during a campaign that these men have little to no business in being in, when the armies of the Empire's foes invades the lands of the Empire, their lack of conviction can grow into zealous devotion in their efforts to ensure that their homes and families shall not suffer a horrifying fate.[1]