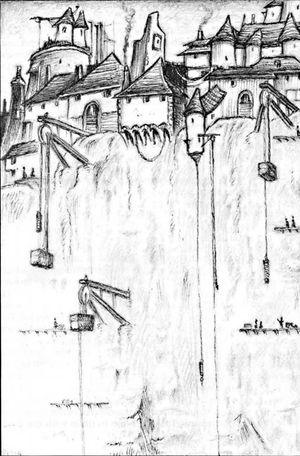 Kemperbad is a freistadt or autonomous trading town in The Empire. [1a]

The town is situated just north of the confluence of the rivers Reik and Stir where the Reik's eastern bank rises some 500 feet above the western and the river itself. A dock is located at the foot of the cliffs and a series of Dwarf made and maintained lifts can move people and cargo to the town above. [1a]

Emperor Boris granted the town its charter in 1066 IC (Imperial Calendar) and it has grown since to be the largest example of this type of town. [1a]

The town is governed by a Town Council. [1b]

Kemperbad is notable for the finest brandy in the Empire also produced in the nearby villages which the town council also controls. [1b] 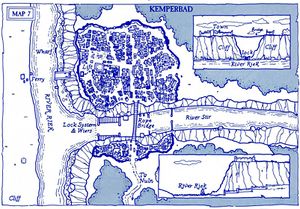